Representation of women in government

The proportion of elected Members of Parliament (MPs) who were women.

The proportion of women elected to local authorities.

As a result of the 2014 General Election, women held 38 of the 121 seats in Parliament, or 31 percent. This was similar to 2011 (32 percent), but below the record 41 women MPs (34 percent) elected in 2008. Under the First Past the Post (FPP) electoral system, women’s representation in Parliament increased from 13 percent in 1984 to 21 percent in 1993, and then rose sharply to 29 percent in the first Mixed Member Proportional (MMP) election held in 1996. Since then, representation of women in Parliament has been relatively stable. Women were first represented in the New Zealand Parliament in 1933.

In the 2014 General Election, women made up a similar proportion of list MPs (32 percent) and electorate MPs (31 percent). In most previous elections, however, women have been more likely to be list MPs than electorate MPs. 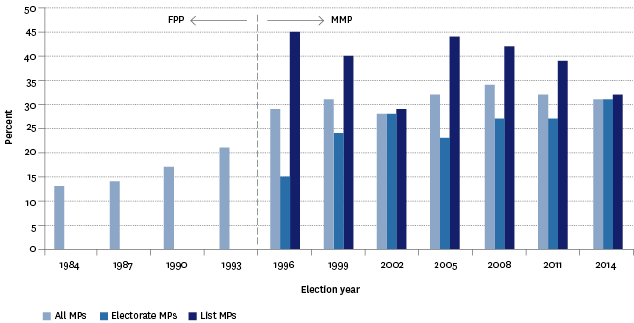 In the 2013 local government elections, 31 percent of candidates and 33 percent of elected members were women. The proportion of women elected to local bodies has risen from one-quarter to one-third over the last 25 years, with the number of women candidates also increasing.39

While relatively few women stood as candidates for city mayoralties in 2013 (15 percent of all candidates), nearly one–third (31 percent) of city mayors were women. The proportion of women elected to city mayoral positions remained fairly steady between 1989 and 2004 at 25–29 percent, with the exception of 1995 (20 percent). The proportion of city mayors who were women fell to 19 percent in 2007, before rising over the next two elections. The number of women mayors in district councils increased rapidly from 10 percent in 1989 to 25 percent in 1998, fell sharply to 14 percent in 2001, and remained at 17 or 18 percent over the next four elections.

Source: Department of Internal Affairs
Notes: (1) Includes Chatham Islands Council. (2) Chatham Islands Council did not elect a mayor in 1989. (3) Invercargill has been a city council since 1992. (4) There was no election in Rodney District in 2001. (5) Tauranga became a city council in 2004. (6) Banks Peninsula District was abolished and included in Christchurch City in 2006. (7) Includes Auckland.

Data for this section can be found at: www.socialreport.msd.govt.nz/documents/2016/cp2.xlsx