The proportion of the population who identify as Māori and who could hold a conversation about everyday things in the Māori language (te reo Māori).44

Māori language is a central component of Māori culture, and an important aspect of participation and identity. It also forms part of the broader cultural identity and heritage of New Zealand. In 1987, the Māori language was recognised as an official New Zealand language.

The proportion of Māori language speakers declined markedly over the last century, particularly following the rapid urbanisation of the Māori population in the 1950s and 1960s. It was not until the 1980s that major Māori language recovery initiatives began.45

In the Te Kupenga 2013 Survey, an estimated 257,500 (55 percent) of Māori adults reported they could speak more than a few words or phrases in te reo Māori.46 Overall, 50,000 adults (11 percent) could speak te reo Māori very well or well, 12 percent could speak fairly well, and 32 percent could talk about simple/basic things in te reo. The remaining 45 percent could speak no more than a few words or phrases. Māori who were able to speak te reo Māori very well, well, or fairly well were more likely to use the language outside the home than inside. There is a strong relationship between te reo Māori and other aspects of culture: Māori with te reo Māori as their first language (learnt from childhood), who knew all aspects of their pepeha (Māori tribal identity), and who felt it was very important to be involved in Māori culture were more likely to speak te reo Māori very well or well.
While the census provides a consistent time series on the number of people who report they can have a conversation about everyday things in Māori, the Te Kupenga 2013 Survey provides more detailed information on the use and proficiency of the Māori language both inside and outside New Zealand homes. The Te Kupenga 2013 Survey measured a sample of the population who identified ethnically as Māori and/or as being of Māori descent. The two sources are therefore not comparable.47 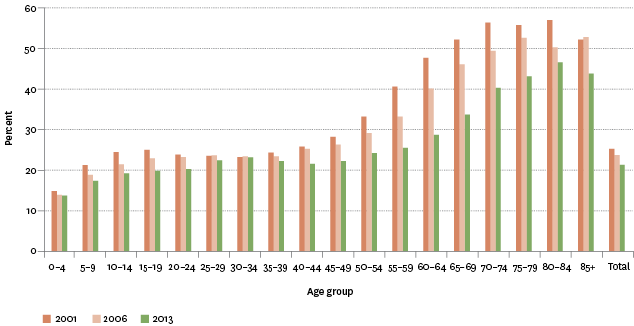 Māori who live in areas with a higher proportion of Māori residents were most likely to be able to hold an everyday conversation in the Māori language. In 2013, the regions with the highest proportions of people with conversational Māori skills were Gisborne (30.4 percent), Bay of Plenty (28.6 percent) and Northland (26.2 percent).

Data for this section can be found at: www.socialreport.msd.govt.nz/documents/2016/ci2.xlsx