The proportion of the population aged 15–64 years who were employed for at least one hour per week.

The employment rate is the best available indicator of the prevalence of paid employment. Like the unemployment rate, it is affected by a number of factors including economic conditions and the availability of work, migration flows, skill levels, family responsibilities, and personal decisions such as undertaking full-time study.

The employment rate for those aged 15–24 years and 55–64 years has remained consistently low over the period of the survey (the rates in 2014 were 51.7 and 76.2 percent respectively). The employment rate for 15–24 year olds has generally been on the decline since 1986 and was impacted the most by the Global Financial Crisis, dropping 9.4 percentage points between 2007 and 2012. In comparison, the decline between 2007 and 2012 for 15–64 year olds was 3.1 percentage points, dropping from 75.1 to 72.0 percent. While 55–64 year olds have the next lowest employment rate, their rates have increased since 1986, rising from 49.0 percent to 76.2 percent in 2014. This reflects the rise in the age of eligibility for New Zealand Superannuation during this period and changing labour market patterns. The employment rate for those aged 65–74 has also shown a steady increase, moving from 11.6 percent in 1986 to 31.1 percent in 2014.

Males have consistently had a higher employment rate than females over the period of the survey. In 2014, males again had the higher rate (79.7 percent, compared with 69.1 percent for females). This is mainly because women spend more time on childcare and other unpaid household work, and are more likely than men to undertake some form of study or training. However, the sex difference in the employment rate more than halved between 1986 and 2014, from 24.5 percentage points to 10.6 percentage points. Over the period of the survey and ignoring the impact of economic fluctuations, male employment rates have been declining, while female rates have increased.

There are marked differences in employment rate by ethnicity. In 2014, the European/Other employment rate was highest at 78.5 percent, followed by the Asian ethnic group (68.1 percent), Māori (62.7 percent) and Pacific peoples (58.3 percent).

As noted, youth experience lower employment rates. This is a particular concern for Māori and Pacific peoples who have relatively youthful populations. In 2014, for those aged 15–24 years, Pacific peoples, Māori, people in the Asian group and European/Others had employment rates of 34.6, 45.5, 44.0 and 57.7 percent respectively. 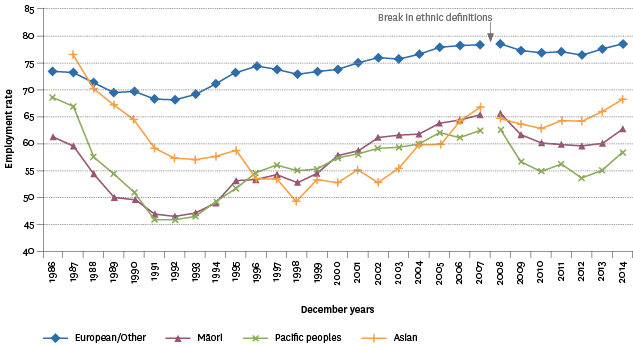 Source: Statistics New Zealand, Household Labour Force Survey
Notes: Average for December years. For 2007 and earlier people are counted in only one ethnic group (ethnicities are prioritised). From 2008 people can be counted in more than one ethnic group (total response). Caution should be used when comparing the two ethnic series over time.

Data for this section can be found at: www.socialreport.msd.govt.nz/documents/2016/PW2.xlsx