The proportion of the estimated voting-age population (aged 18 years and over) who cast a vote in general elections.

The proportion of all enrolled electors (both resident and ratepayer34) who cast a vote in contested local authority elections.

Voter turnout rates are an indicator of the confidence the population has in political institutions, the importance they attach to them, and the extent to which they feel their participation can make a difference.

General elections in New Zealand usually occur every three years, with the last election held in November 2014. Voter turnout of the eligible population in 2014 was 72 percent, an increase from 70 percent in 2011, as reported by the Electoral Commission.

In the last 30 years, voter turnout has fluctuated from a high of 89 percent in 1984 to a low of 70 percent in 2011. Overall, there has been a general decline in voter turnout over time, with the lowest percentage of people voting occurring within the last two election cycles (2011 and 2014).

The New Zealand General Social Survey (NZGSS) looked at reasons why people did not vote. The main reason people gave for not voting in the 2011 General Election was they “didn't get around to it, forgot or were not interested” (21.0 percent). Another 12.3 percent of non-voters said they did not register for the 2011 election, while 10.0 percent were “overseas or away on election day”. A further 7.1 percent of the non-voters said they did not think their vote would make a difference – a big increase from 3.9 percent in the 2008 election.

Source: Electoral Commission
Note: The 1984 figure has been calculated by the Ministry of Social Development.

The NZGSS also looked at the demographic characteristics of non-voters. In the 2011 General Election, as age increased, the proportion of non-voters decreased. There were more non-voters aged 18–24 years than in the older age groups (41.8 percent, compared with only 5.2 percent of people aged 65 years or over).

People in the Asian ethnic group were the least likely to vote (35.3 percent did not vote) compared with those who identified as Māori (26.8 percent), Pacific peoples (17.6 percent) or European (16.8 percent). However, this is because of the large migrant population from Asia, rather than the ethnicity itself. Almost 60 percent of recent migrants did not vote in the 2011 General Election; this includes people who said they were not eligible because of visa status. Long-term migrants reported very similar voting behaviour as those born in New Zealand, with 18.2 percent and 16.3 percent respectively not voting in the 2011 General Election. 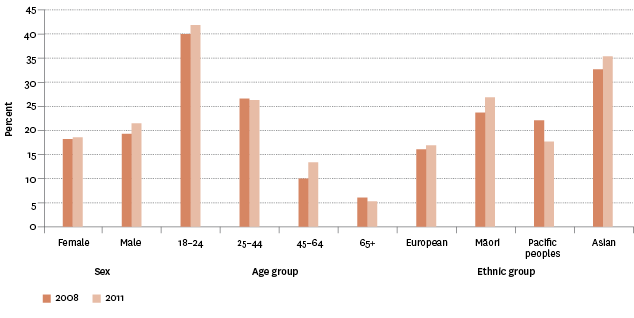 Using a different definition of voter turnout (the proportion of the registered population who voted), New Zealand was ranked 9th out of 34 OECD countries, with a voter turnout rate of 77 percent in 2014. This was higher than the OECD median of 66 percent for recent elections.

Data for this section can be found at: www.socialreport.msd.govt.nz/documents/2016/cp1.xlsx