The proportion of the population aged 15 years and over who participated in tertiary education.

The acquisition of a tertiary qualification provides individuals with additional skills and knowledge to participate in society and in the economy.

Between 1998 and 2005, there was a rapid rise in age-standardised tertiary participation rates, with rates increasing from 8.2 percent to 13.5 percent. Since this time, rates have declined significantly, falling to 10.2 percent in 2014, which is largely a result of declining participation in sub-degree level qualifications.

The sharp decline in age-standardised participation rates at sub-degree level followed 2005 reviews of the quality and value for money of sub-degree qualifications and a subsequent emphasis on higher-level, higher-value qualifications. For example, participation in Level 2 Certificates, which provide individuals with introductory knowledge and skills for a field of study, fell by 1.5 percentage points between 2007 and 2014, from 2.6 percent to 1.1 percent. 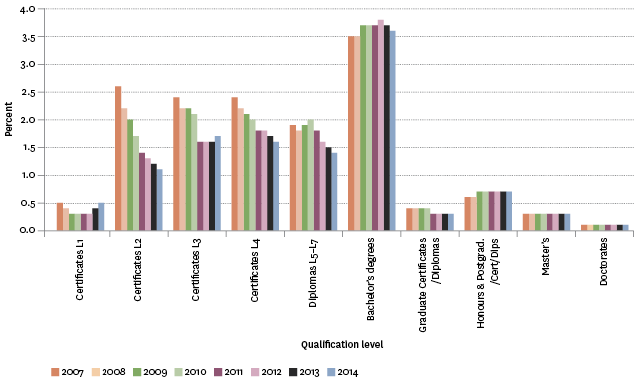 Source: Ministry of Education
Note: Figures for males, females and the total are age standardised.

In 2014, Māori had the highest age-standardised tertiary participation rate (14.7 percent), followed by Pacific peoples (11.4 percent), Europeans (9.9 percent) and the Asian ethnic group (8.2 percent). Variations in the rate, ranking and spread of participation rates across ethnic groups in 2014, and over time, are strongly influenced by differences in the qualification level at which students are participating. 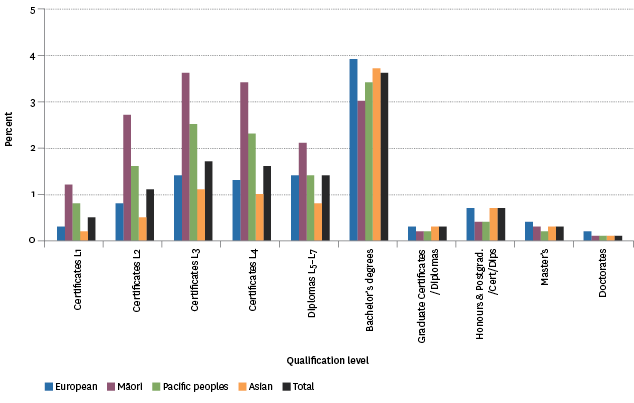 There are no internationally comparative figures to measure tertiary participation. The OECD does, however, report on enrolment rates in education for full-time and part-time students in public and private institutions at all education levels. Data is available for those aged 20–29 years – the age group usually enrolled in tertiary education. For younger age groups, it is difficult to differentiate tertiary from school level education.

In 2012, the New Zealand enrolment rate was 29 percent for those aged 20–29 years. This was below Australia (35 percent), but above the United States (27 percent), the United Kingdom (19 percent), and the OECD median measured across 28 countries (28 percent).12 Denmark had the highest enrolment rate at 43 percent.

The OECD enrolment rate for New Zealand has been trending down and declined between 2005 and 2012 from 32 percent to 29 percent. This compares with the OECD median across 28 countries over the same period, which was trending up and increased from 25 to 28 percent.

Data for this section can be found at: www.socialreport.msd.govt.nz/documents/2016/k3.xlsx