The Social Report monitors outcomes for the New Zealand population. To provide a context for the indicators that follow, this section contains background information on the size and characteristics of the population. 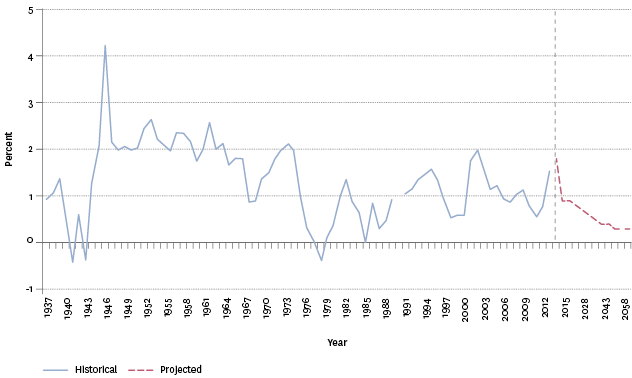 New Zealand’s estimated resident population grew by 67,800 (1.5 percent) in the year to June 2014, with natural increase (births minus deaths) contributing 29,500 and net migration contributing 38,300. This is the highest gain from net migration in a June year since 2003, and is more than 30,000 higher than in the previous year. 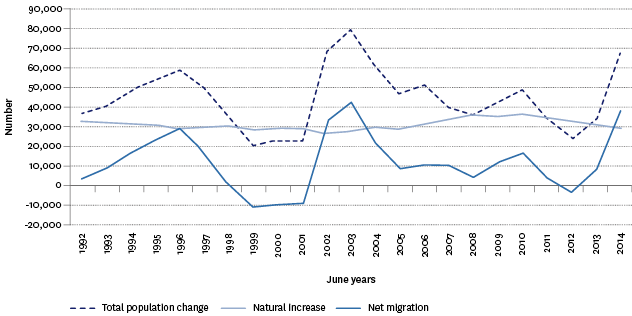 Looking forward, births are expected to average at least 60,000 a year. In comparison, deaths are expected to gradually increase over time as a result of population growth as more people reach the older ages where most deaths occur. Deaths will increase from 30,000 in 2015 to more than 40,000 by the late 2030s and 50,000 by the 2050s. With deaths rising faster than births, annual natural increase is likely to decrease.

Ethnic composition of the populationTop

In 2013, just under three-quarters of the population (2,969,000 or 74.0 percent) identified with one or more European ethnicities, compared with 67.6 percent in 2006. This increase is in part a result of fewer people identifying themselves as a “New Zealander” in the 2013 Census.2 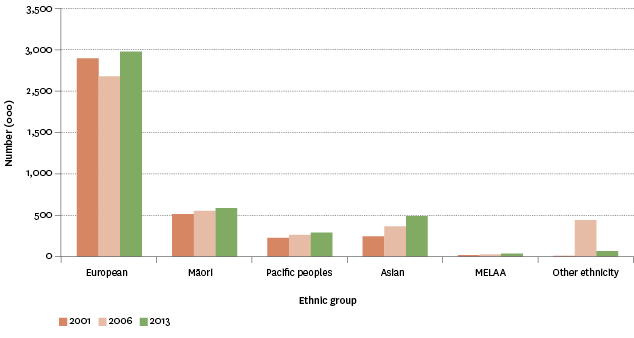 Source: Statistics New Zealand
Note: People were able to identify with more than one ethnic group.

It is expected that the Māori, Asian and Pacific populations will continue to increase their share of the total population, and that the Asian population will exceed the Māori population from the mid-2020s.

Age and sex structure of the populationTop

The median age of New Zealand’s population increased from 25.6 years in 1970 to 37.5 years in 2014. The ageing of the population will continue, with a median age of 40 years likely to be reached in the early 2030s. This gradual ageing reflects the combined impact of people living longer and having fewer children, along with the large number of people born between 1950 and the early 1970s moving into the older ages.

The ethnic groups have different age profiles: Europeans had the median age of 41.0 years in 2013, compared with 22.1 years for Pacific peoples and 23.9 years for Māori.

New Zealand’s total fertility rate has been relatively stable over the last three decades, averaging 2.03 births per woman. This is in contrast to the period from the mid-1940s to the 1960s when fertility was much higher, peaking at 4.31 births per woman in 1961. 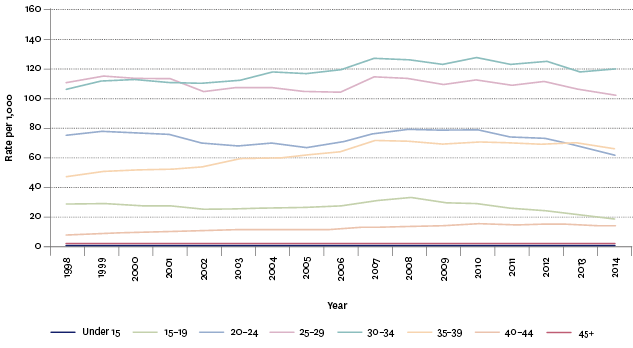 Source: Statistics New Zealand
Note: The rate for those aged under 15 years is around the same level as for those 45 years and over.

In 2013, less than half of those born in Asia and living in New Zealand had been in New Zealand for 10 years or more (47.4 percent). This compared with 67.6 percent of people who had been born in the United Kingdom/Ireland and 63.9 percent of Australian born.

In 2013, the median age for those born overseas was 41.8 years, compared with 36.2 years for people born in New Zealand.

In 2013, almost all people were able to speak English (96.1 percent) (ie could hold a conversation about everyday things). Those who could not speak English were most likely to be adults who were born overseas, identified with an Asian ethnicity, and lived in Auckland.

Much smaller proportions of New Zealanders could speak te reo Māori (3.7 percent), with one–quarter (24.6 percent) of those being children. In the 2013 Census, 21.3 percent of all Māori reported that they could hold a conversation in Māori about everyday things, a decrease from 2006 (23.7 percent) and 2001 (25.2 percent).

Approximately 6,000 people said they could communicate in all three of New Zealand’s official languages, a 6.3 percent drop from 2006.

All South Island regions had higher proportions of people who identified with European ethnicities than any region in the North Island.

In 2013, Gisborne (48.9 percent) and Northland (32.4 percent) had the highest proportions of people identifying as Māori.

A household may contain a single person living alone, or two or more people who usually live together and share facilities as a family (a couple, parents with children), a group of families, a family with other people, or a group of individuals living together.

A couple with children (41.3 percent) was the most common family type in 2013, though this proportion has been decreasing since 1991, when these families made up 48.0 percent of New Zealand families. Couples without children were the second most common type (40.9 percent), with this proportion increasing since 1991 (34.8 percent). It is projected that couples without children will become the most common family type by 2038.

In 2013, 91,000 families included dependent young people (aged 18–24 years, not employed full-time, and living with at least one parent). Of those, just over half were in full-time study, while 6.5 percent were studying part-time. Four in ten were employed part-time.

Parents with dependent children living in other householdsTop

Many parents who have separated from their spouse or partner have children living in another household. Because family statistics are household based, these parent-child relationships are not counted.

Europeans were most likely to own or partly own their home (56.8 percent), compared with 34.8 percent of people in the Asian ethnic group, 28.2 percent of Māori and 18.5 percent of Pacific peoples.

In 2013, 48.9 percent of people stated that their religion was affiliated with a Christian religion, down from 55.6 percent in 2006. The largest Christian denominations were Catholic (492,000), Anglican (460,000), and Presbyterian, Congregational and Reformed (331,000). There have been large increases in people affiliating with the Sikh, Hindu and Islam religions. Between 2006 and 2013, Sikhism more than doubled, while Hinduism increased by 39.6 percent and the number of Muslims increased by 27.9 percent. Numbers affiliated with these religions remained relatively small, however.

In 2013, 24 percent of the New Zealand population identified as disabled, a total of 1.1 million people. Disability is defined as an impairment that has a long-term (six months or longer) limiting effect on a person’s ability to carry out day-to-day activities.

People aged 65 years or over were much more likely to be disabled (59 percent), compared with those aged 15–65 years (21 percent) or children under 15 years (11 percent). Ageing has an impact on the disability rates, particularly for physical impairments.

Māori (32 percent) and Pacific peoples (26 percent) had higher-than-average disability rates, after adjusting for differences in ethnic population age profiles. Europeans (24 percent) had a slightly lower rate than Pacific peoples, while the rate for the Asian ethnic group was 17 percent.

Physical limitations were the most common type of impairment (14 percent), followed by sensory impairments (11 percent – hearing and vision loss that hearing aids and glasses do not eliminate) and psychological/psychiatric impairment (5 percent). Among children, learning difficulties were most common.

Just over half of all disabled people (53 percent) had more than one type of impairment.

There is little population information based on sexual orientation or gender identity in New Zealand, and little reliable data on the size of gay, lesbian, bisexual and transgender populations.

Data for this section can be found at: www.socialreport.msd.govt.nz/documents/2016/p.xlsx